How Migration Timelines might Triple (At Least) Last December our team encountered a strange new behavior in our Office ...

Effectively we were seeing significantly reduced migration speeds to Office 365 due to “throttling-backoffs”.  Despite having lifted the Microsoft Office 365 throttling limits for various customer tenants, we encountered new limits that we have not seen before.  This was a global phenomenon, spread across all projects and certainly not limited to a specific region.

This was not a pleasant situation as our logs were full of Office 365 Migration Service Throttling Backoffs and migration performance was dramatically reduced.  We initially assumed that this must be a bug/misconfiguration of the Office 365 throttling policy and started opening support cases with Microsoft.  Support concluded the same as the online throttling test in the Office 365 portal diagnosed: “the tenant is not being throttled” – the net result was that Microsoft support denied the fact that this was happening at all.

After working our various communication channels and providing some further backend diagnostics, we discovered we were not hitting any tenant-based throttling but something new known as “Service Protection Throttling.”

On Friday January 22, 2021, sources close to Microsoft Engineering confirmed that Microsoft put a new and permanent layer of Office 365 service protection in place.  Furthermore, the source states that those changes are permanent and that there is and will be no possibility of getting exceptions for tenants.  Unfortunately, Microsoft did not deem it necessary to announce this publicly, but it was put in place to maintain database health and prevent mailboxes from becoming quarantined.

As the CEO of a migration company that offers cloud-based services, I can totally understand Microsoft’s points of view.  A vendor that offers tenants in a shared environment needs to ensure that the performance of a single tenant does not affect the performance of other tenants.  That said, there is no doubt this will have a significant impact on the Office 365 migration services market at all levels.  Worst case, the new speed limits lead to a maximum ingestion speed of 150MB over a 5-minute slot across all mailboxes; Best case, to a similar speed per mailbox, migrating in parallel.

The net result is that the new policies could potentially triple or quadruple overall project times required to achieve the same migration as before Microsoft enforced the service protection throttling in Office 365.

Now for the good news!

While I may be biased, having the best team and technology in the industry allowed us to;

Here are some quick highlights to demonstrate how this played out once we understood the challenge: 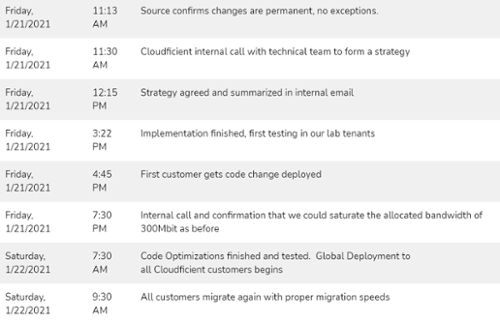 If you are currently performing a migration to Office 365, experiencing Office 365 throttling limits, and you’re reading this, make sure to contact your migration vendor.  Only they can solve the problem as Microsoft has a valid point in protecting other tenants from increased performance requirements caused by mass extractions and ingestions.

If you are about to start a migration project, always ask your vendor of choice for a POC before you commit, to make sure that they have the above described problem under control.

If you are a migration vendor and you’re reading this, you need to own this Microsoft throttling problem for your customers’ sake.  When project times triple or quadruple, this becomes a severe issue for most of the customers and most likely threatens the project’s real ROI.

If you are a Microsoft employee and you’re reading this, I understand and agree with service protection, but communicating these things internally (to your support) and externally (to your customers) would have saved an entire industry a lot of headache, time, and effort.

If you are a current (or future) Cloudficient customer and you’re reading this, be confident with the notion that we always have your back and do everything to solve issues as fast as possible.

We have additional news on this, click here to find out more.
In the video below MJ will share real life statistics about how service protection throttling affects customer migrations to Office 365
Onboarding to Office 365 EV Migration Office 365 Service Protection Throttling Cloud Scale Migration Platform

Find out why it doesn't make sense to split Office 365 Onboarding and legacy archive migration into different projects.

Office 365 Migration Types: Everything You Need to Know for a Successful Migration

Find out about the different types of migration that can be undertaken using Cloudficient technology to migrate to Office 365.

There are many questions to ask & consider when planning an Office 365 migration. Consider the 3 questions in this blog before you commit to any...